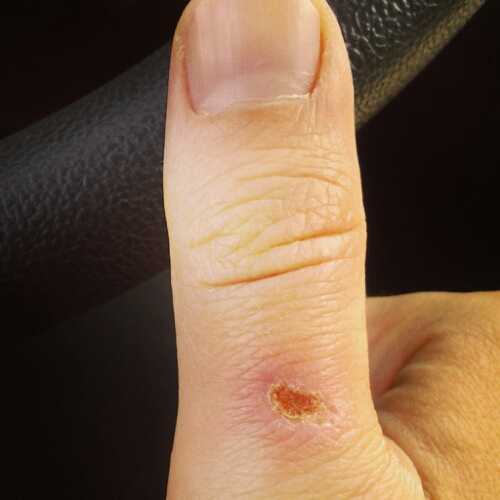 I fought the potatoes…and the potatoes won.  This little burn wound is about a week old.  It looks much more tame than it did initially.

Why do they make the handles on big pots so small and awkward?  Why do I think that I’m stealth enough to get away unscathed?   And why is everything in the kitchen sharp or scalding hot or ice cream or butter?  It’s such a dangerous place to be.

Of course there’s one left.  Such irony.  Such perfect irony.  One perfect pink little blossom left.  Am I the bleeding heart, you ask??  Does my blood valve chamber leak sticky red liquids?? 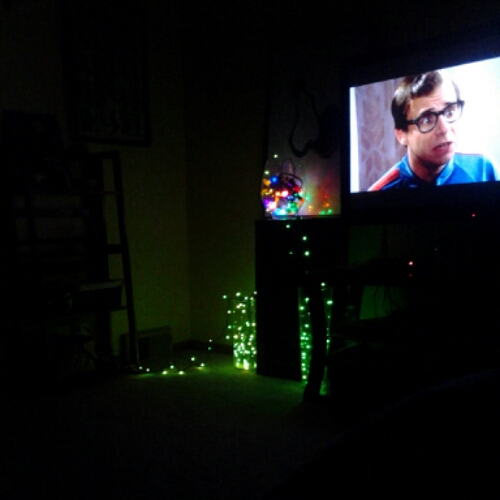 Sounds like the makings of an awesomely terrible sci fi comedy/thriller starring on screen love interests Ian Ziering and Candace Cameron.  The villain, a superstitious werewolf, would be played by my newly appointed favorite, Rick Moranis.  Guest appearances by Dolly Parton, Keanu Reeves, and Dave Coulier.

I imagine this made-for-tv movie to become a cult favorite…if not for the mind blowing storyline and acting, but for the kick ass soundtrack.  More music than talking, perhaps. We’ll even throw an Alanis song in there when Dave ironically bites the bullet. 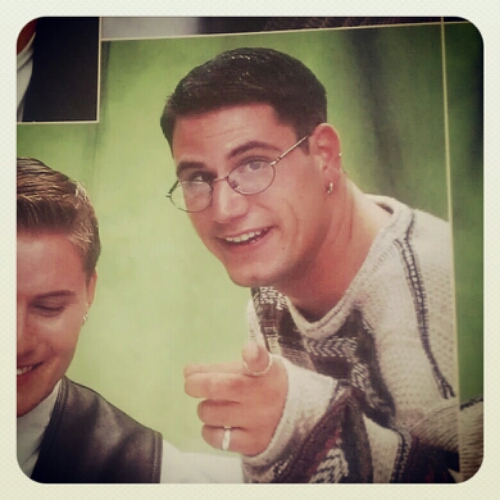 4 years of putting my shit out there.

Good Lord, you people love dogs!  That’s ok, I do too.

Take a gander through the archives if you desire…sometimes I still giggle at the things I’ve admitted in writing.  I still get little pretzel knots in my stomach thinking about how much of my brain I actually share.

Also…I should totally have front row seats to Pearl Jam and a six figure book deal by now.  Where are the connections that I’ve dreamed up in my head??

Where, oh, all knowing internet, where???? 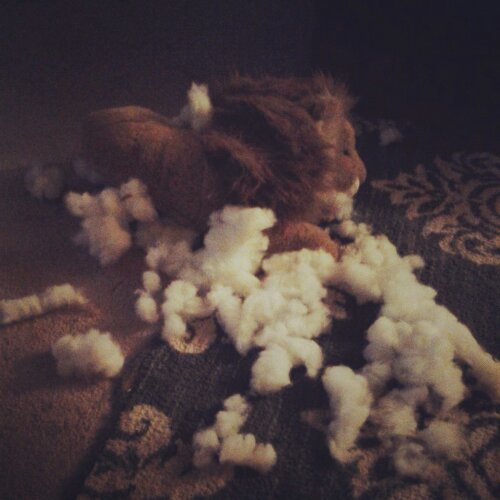 Every time I vacuum.

The lovelies and I caught a few ice skating performances on the Olympics last night.

I remember being young and watching in awe…gawking at the girls in sparkly outfits spinning and hurtling themselves through the chilly air.  I always wondered how they got those nude colored leggings around their skates without tearing holes in them.

There was a woman who skated to Pink Floyd last night.  Shine on you crazy diamond.

I began to think of all the great songs I would skate to if I were talented and not a weak ankled, fat knee’d, awkward faced, cynical mom with unachievable, athletic, childhood dreams.

Grunge is like poetry, arguably, and so is ice skating, I guess.

I could wear a signature Cobain cardigan.  I could have a pair of Doc Marten ice skates fashioned as well.

I wouldn’t smile.  I would keep an air of angst and dirt and just enough self doubt.  I might even flip people off but I would school some fucking ice skating haters.  I would be so good on those triple axles and so visually and musically ironic, no one could handle it.

I would be the best role model for young girls.  My own kids would roll their eyes and say, ugh mom, not Pearl Jam again.

I must admit, I tried really hard…I did. I searched inside this brain of mine to decipher the simple code.  More like a puzzle than a code.

At first I just tried to pronounce it and assumed it was a great sound to go with ‘whatever.’  Very much like a pfffft or pshaww.  A little valley girl-esque.

And I now have to admit that it’s bothered me for at least a year and I felt too dumb to ask anyone, and it seemed like everyone had been using it.  I want to be in the know…in on the secret.  So I just looked it up. I just fucking googled smh.

This is what’s going to happen a few short years from now when my innocent little girls become hormonal tweens and begin to talk in code to their friends on their fucking gold iPhones.  I’m going to be on our huge home computer searching the internet for answers into their communication methods.  They’ll be behind my back lol’ing. 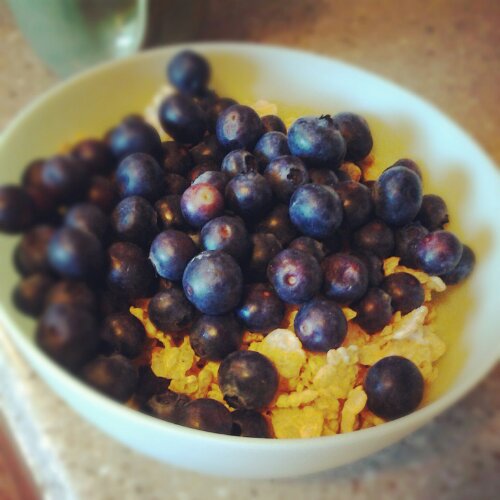 I’m a big fan of the blueberry.

So much, in fact, that I would rather have more berries than cereal.  Why put them in there in the first place if you don’t get at least 3 blueberries per bite?  Let me tell you, Special K is not that special without sprucing it up a little.

I purchased these particular berries from Target.  Wait, Target?  Uh…yeah.  We have a quote unquote ‘super’ Target near our home.  They sell groceries.  It’s like an upscale Super Wal*Mart.  At any rate, they tend to have some good deals and sales on random food items sometimes.  Yesterday, it was blueberries.  2 containers for $6.  Awesome!  Especially when a quarter pint is like $6.

I snatched up those bad boys in a minute.  I gathered a few other things and soon realized that I probably should have grabbed a basket for my shopping…but I was in a hurry, on my way to work, and just wanted to stop and grab a few things.  I loaded my arms full of lettuce, sugar snap peas, a sack of trail mix, said pints of blueberries and was wandering down the frozen aisle, thinking that I might want some frozen peas.

I walked down the aisle.  I spotted the peas.  Peas must’ve been popular too, as the package I wanted was way in the back of the cooler.  I shifted the items in my arms a little, opened the cooler door, and reached my arm in there.  My arms felt lighter.

I looked down at my feet.  One of the containers of sweet, juicy, on sale blueberries had taken the leap.  It had slipped off my perfectly balanced tower of food and was plummeting towards the floor.  It hit like a firework on the 4th of July.  The tiny blue rounds scattered in all directions.  They rolled in all directions and surrounded me.  Perhaps 7 remained in the actual container.

I stood there.  Stunned.  I looked up to see if anyone had witnessed this hilarity.  There was another woman having difficulty making a decision over pizza way down on the other end of the aisle.  Thankfully, the berries hadn’t made it all the way to her, yet.  I was hoping she would look at me and that we would share a giggle.  She kept her nose to the pizzas.  Surely, someone had to have seen this happen.  Nope.

I darted away, tip-toeing carefully around my beautiful berry firework sculpture on the floor.  I felt one burst under my boot.  ‘Sorry little guy,’ I thought in my head.

I went back to get another pint (duh…sale)…and then headed out to find someone to tell about my misfortune.  I saw a red shirted employee carrying a bunch of baskets.  He saw my armful of goodies and asked if I needed one.  Ah, the irony.  I did…and I didn’t.  I admitted that it was me.

It was ME that dropped the berries!!! 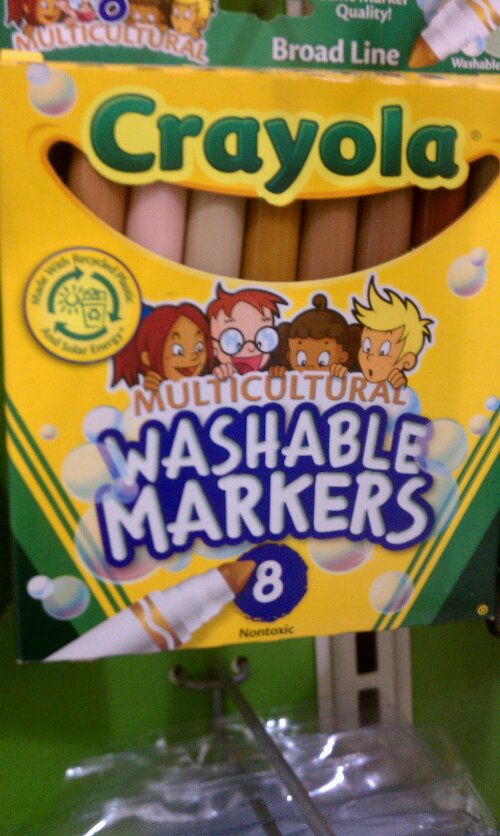 Why should you have to buy a whole different package of markers just to get the whole human race? Can’t they just include all these with classic colors? I wonder what the names of the colors are. African-American brown? Pasty white girl? Mandarin?? And also…I teach my little lovelies to color people blue, green, and purple polka dotted if they want. It’s art. Why does everything have to be so literal? Let’s just give the kids all the tools they need and let them be a little more creative. Pretty soon they’ll have to declare their political party of choice in kindergarten.

Hey, thanks for visiting...I truly appreciate it. Stop by again, anytime!

All ideas, content, photos, and opinions are property of thebrainofkate...please respect the brain.